Researchers are pushing the boundaries of virtual reality technology research and experimenting with new forms of input devices, user interfaces, multimedia and 360 degrees user experience (complete a 360 degree feedback for that process)! 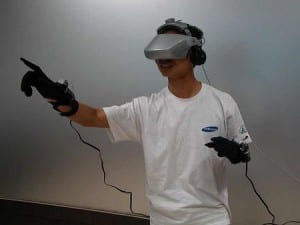 Advances in film, television and the media also contributed to these developments. This has continued to this day with the creation of virtual reality gaming for example the Nintendo Wii which uses a handheld controller as a tracking device. The gamer uses this to interact with objects on the screen in front of them and as a result, changes the interaction.

This combined with advancements in graphics and video technology and the emergence of virtual worlds such as ‘Second Life’ mean that we can fully engage with these environments in ways which we had never previously considered.

Virtual reality technology is currently being used to create virtual environments such as those seen in military applications. They use these for training purposes for example, flight simulators as well as battle scenarios, e.g. searching for unexploded bombs.

It is a combination of several things such as an increase in processing speed, bigger and better graphics cards, advances in interactive technologies, increased interest in virtual worlds and not forgetting, web 2.0 in which the dominant theme is interactivity.

The internet plays an important part in all of this. There has been a shift from the idea of the web as a passive experience to web 2.0 in which we as users play a far greater role. Users generate content which is shared with millions of others as can be seen in the rise of social media, e.g. Facebook and Twitter.

All of these put users firmly in the driving seat. We control the means of interaction and help to create new and exciting forms of interaction which will drive future developments in virtual reality.

The concepts behind virtual reality are based upon theories about a long held human desire to escape the boundaries of the ‘real world’ by embracing cyberspace. Once there we can interact with this virtual environment in a more naturalistic manner which will generate new forms of human-machine interaction (HMI).

Beyond the keyboard and mouse

The aim is to move beyond standard forms of interaction such as the keyboard and mouse which most people work with on a daily basis. This is seen as an unnatural way of working which forces people to adapt to the demands of the technology rather than the other way around.

But a virtual environment does the opposite. It allows someone to fully immerse themselves in a highly visual world which they explore by means of their senses. This natural form of interaction within this world often results in new forms of communication and understanding.

Freedom within the 3D virtual environment

The experience of a virtual world mimics that of a

Plus the fact that they can do this in a 3D environment means that they replicate an experience similar to that in the real world but without many of the dangers.

This is preferable to trying to simulate these experiences in a two-dimensional setting, e.g. a computer desktop.