Virtual worlds are persistent implementations of a space or container that can contain both player objects (the gamers) and tangible objects (weapons, health packs, magic spells, bases, houses). Virtual worlds have their own properties such as physics, weather, communication, colour and terrain. 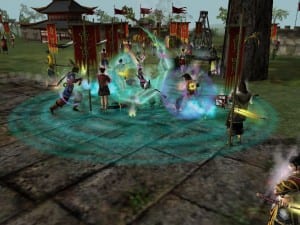 Any multi-user text based virtual world is referred to as “a MU”, this term is similar to the term *NIX meaning Linux, Unix, HP-UX or AIX.

Sometimes also referred to as a Multi-User Domain it is a game. The name is derived from the first virtual world to be successful . Often with a role-playing element, the term is more specific than MU because it refers to a specific genre of games rather than any (not necessarily game-oriented) virtual world.

Many virtual worlds have developed, over time, straying from the role-playing game genre to be come more socially oriented or fantasy oriented, allowing players to act out a fantasy be that pretending to be a dwarf for a week or settling down with a family and having children.

Role Playing Games are games which ask the player to immerse themselves in another role. It does not have to be an online game, board based RPGs like Warhammer5 were popular long before computer games became popular. This site refers regularly to MMORPGs – Massively Multiplayer Online Role Playing Games.

First Person Shooter is a computer game only term, relating to games which are viewed from the “virtual” players eyes and generally using some kind of projectile weapon to “shoot” other players, be they computer or human controlled. This site refers to MMOFPSs – Massively Multiplayer Online First Person Shooters

Mobiles and Non-Playing Characters are computer controlled artificial intelligences, designed to mimic the actions of human players. Their purpose is to provide some challenge to the players or to populate some otherwise unpopulated virtual world.