Virtual reality is defined as computer-simulated environments which are able to replicate a virtual presence in places that exist in the real world. Most of the current virtual environments consist of primarily visual experiences, which are displayed through a computer monitor.  There are some virtual reality simulations that have the capability to add extra sensory information, such as sound or tactile sensation.  The simulated virtual reality environment is often designed to feel natural presenting a lifelike experience.  This can be very beneficial, especially when used for training and simulations during pilot or combat preparation.  It’s very difficult to manufacture a high-fidelity VR experience, in most part due to limits on computer processing strength, image resolution, and bandwidth.  The hope is that these limitations will be overcome as related technologies gain power and become more cost-effective. 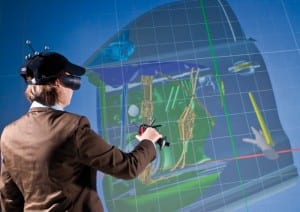 Around the middle of the 1950s, Morton Heilig a cinematographer, envisioned an experience in theaters capable of stimulating his audiences’ senses.  Effectively drawing them further into the story. He constructed a single user console named the Sensorama that included features like a stereoscopic display, odor emitters, speakers with stereo sound and a chair the moved. His mounted TV display allowed users to watch 3-D television.  These concepts that Heilig used paved the way for the beginnings of virtual reality.

Philco Corporation created the first head mounted display in 1961, and called it the Head Sight. This helmet had both a video monitor and tracking system, which the engineers connect with a closed circuit camera system. Their intention was for the HMD to be used in dangerous situations, allowing users to observe the real environment from a remote location. Bell Laboratories was next in there development of HMD for use by helicopter pilots to permit them a clear vision field during night flights.

In 1965, Ivan Sutherland, a computer scientist, dreamt up what he labeled the “Ultimate Display.” This allowed users to peek into a virtual world that would appear, which felt as real as the physical world. This vision would serve as the guide for all future developments related to the field of VR.  Sutherland built a head mounted display that was linked to a computer system. Computers produced the graphics for display, instead of just cameras.  The HMD was able to display images in stereo, which gave the feeling of depth, and it the added ability to track head movements of the user, making the appropriate changes as the user move their head.